Being a cake decorator is pretty great. I get to be a part of people's best days, I get to play with sugar all day, I get to listen to music all day long, and I can go to the bathroom whenever I want! (All of those things were not true of my previous career.)

Also pretty great: I get to meet other cake decorators! 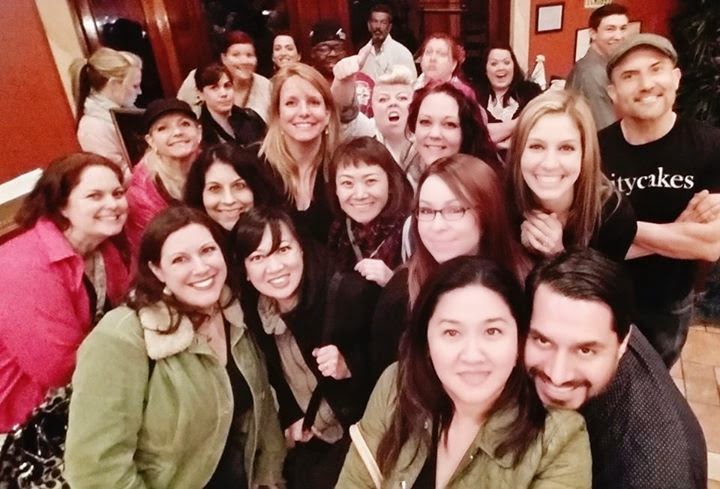 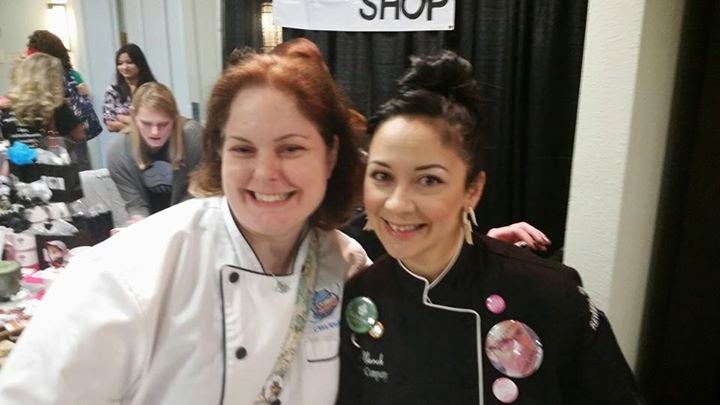 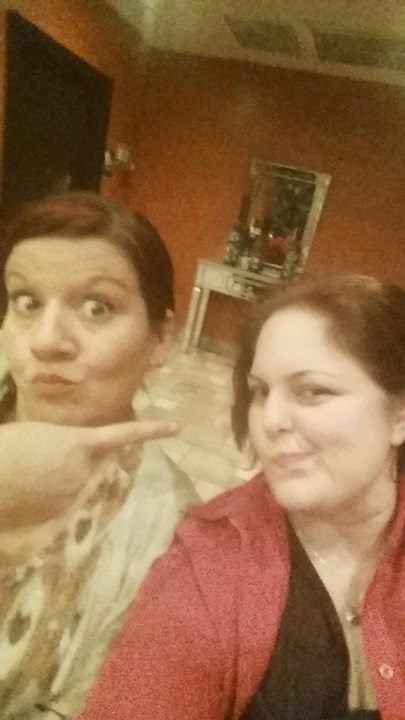 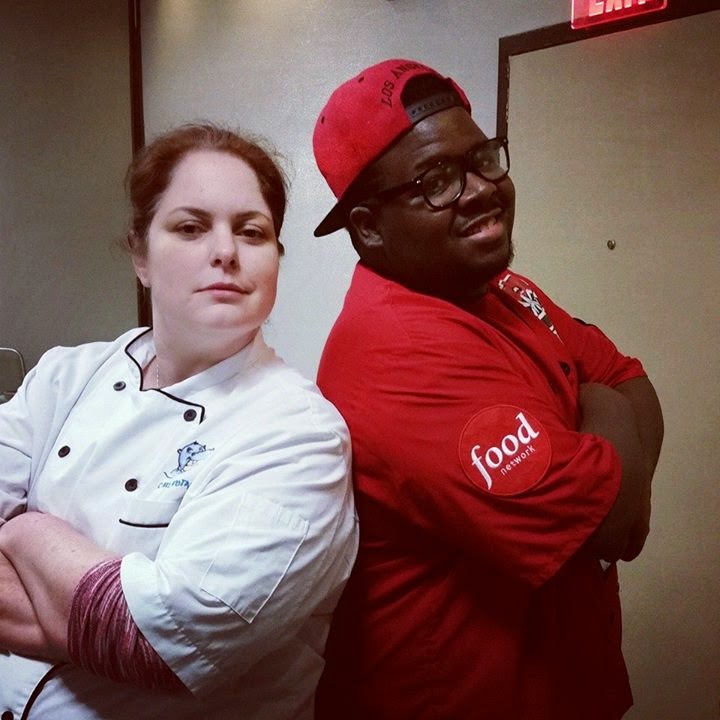 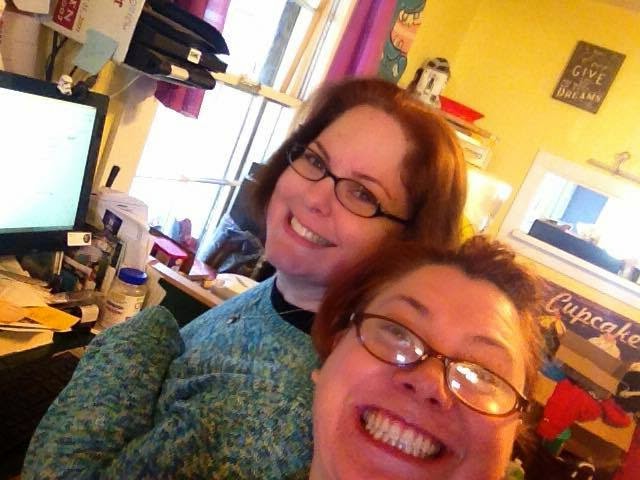 I've made some amazing friends through cakery. Decorators and sugar artist from all over the world who get my fondant jokes and don't bother asking why I'm wearing a wrist brace- because they have them, too... it's wonderful. 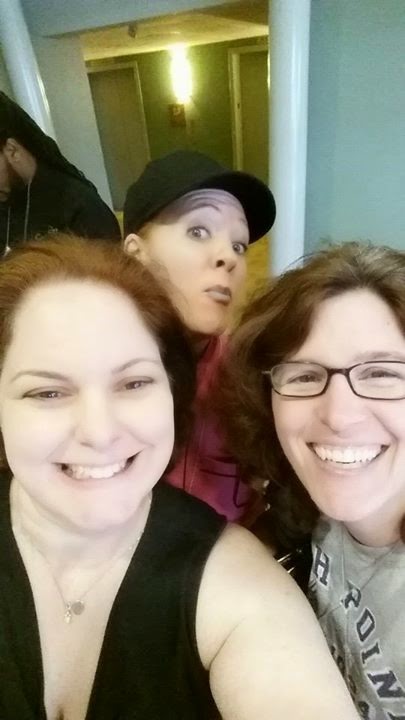 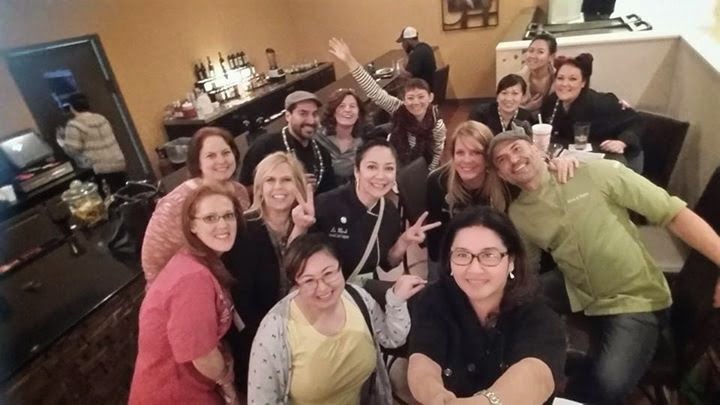 In March, I went to the CakeFest cake show in Louisiana to take some classes and pal around with my cake buddies. One of those buddies, Christel, made this amazing cake for the competition. 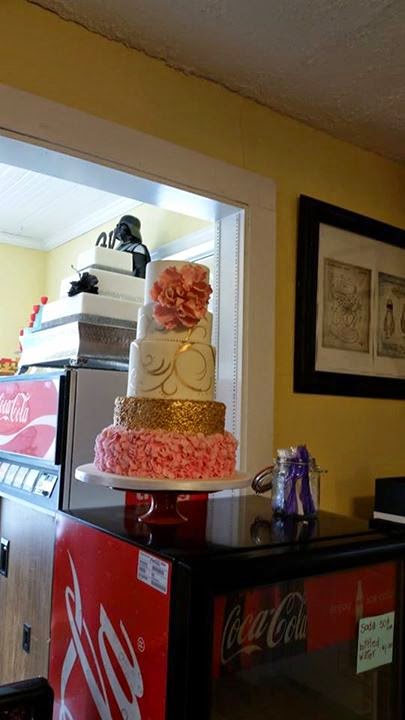 Isn't it pretty? Unfortunately, Christel flew to the cake show and so logistics were preventing her from taking her cake display home. Since her home is in Atlanta, I offered to drive her cake home with me so that she could come get it from Cakeapotamus. We're not too far from Atlanta, after all. And so I did.

But you know how it is.

Sometimes, you have a beautiful display cake sitting in your bakery that isn't yours, and you start to get... antsy. I swear, I don't know where these ideas come from, but I found myself thinking, "Wouldn't it be funny if I got some pictures of the Cakepot characters with Christel's cake and sent them to her?"
[ProTip: If you hear me utter the words, "Wouldn't it be funny...", proceed with caution.]

So, we started where you might expect: Stormtrooper attack. 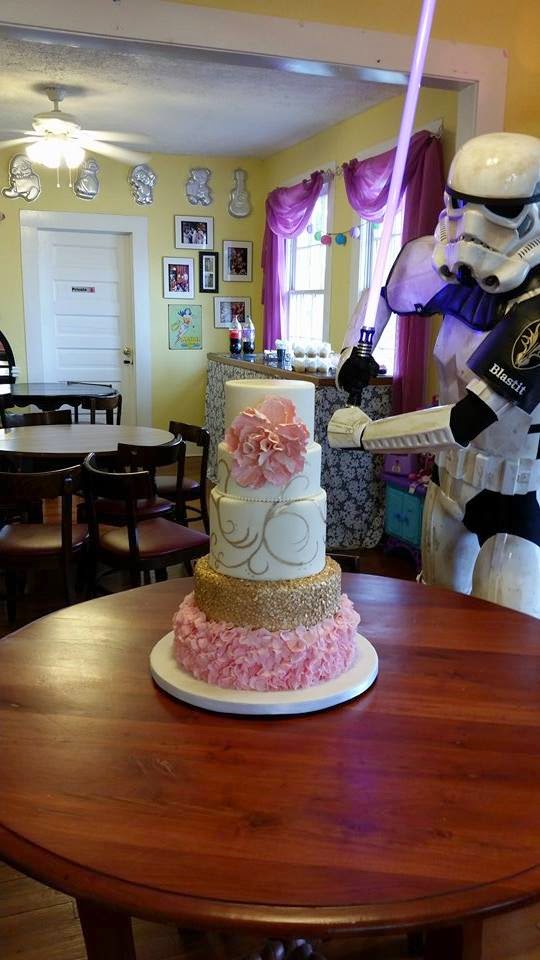 Hey, did you know that if you click on a picture in Facebook Messenger, you can draw on it like in Paint? Check out this high quality special effect that I drew: 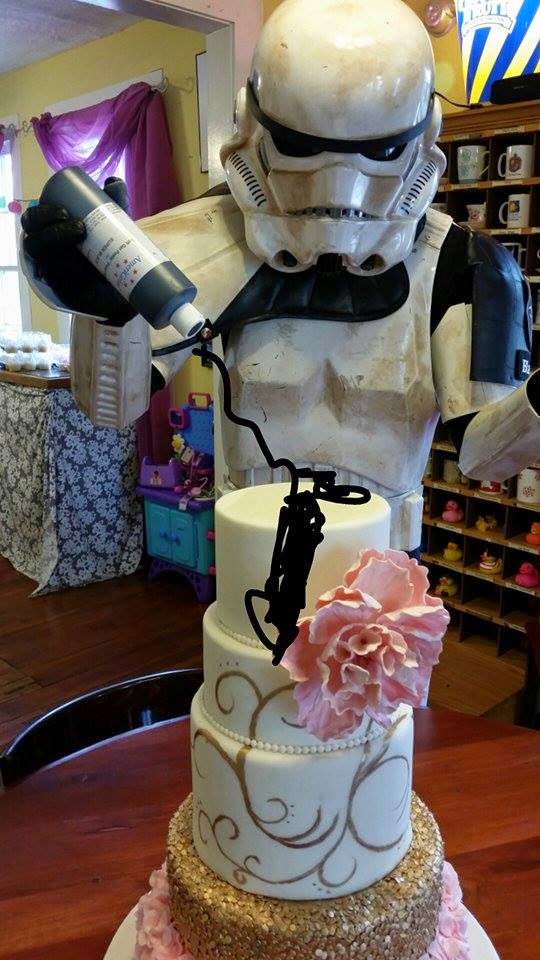 My life is so much fun.
"What next?", I wondered. Oh! What about that scene in Ghostbusters where he pulls the tablecloth off the table in the fancy room?
Right? I only had about a week to do this, so I was crunched to see who, if anyone, I could get to come take a picture with this cake. I must say, the cakepots came through with flying colors.

I got a little Harry Potter action: 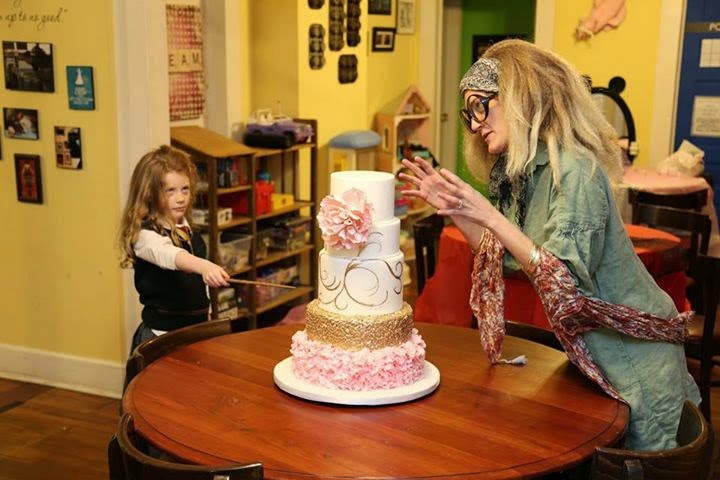 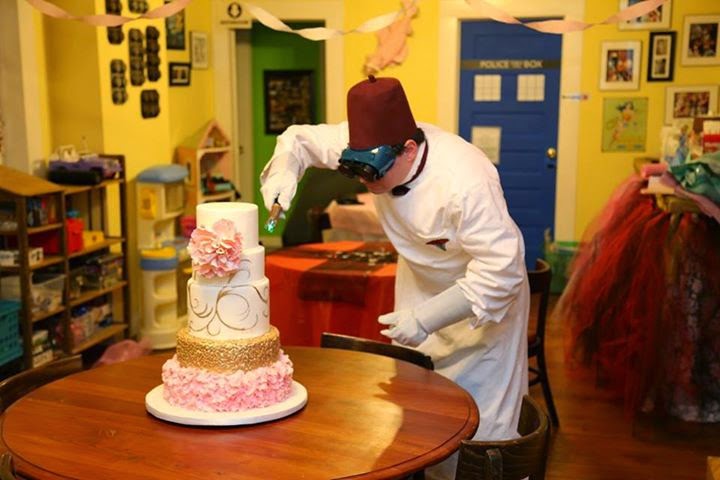 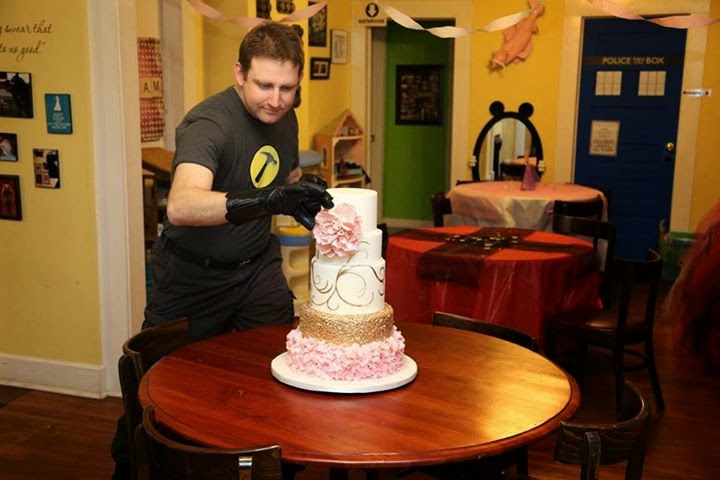 Me and my airbrush... can you imagine the havoc this thing could wreak on that white fondant? 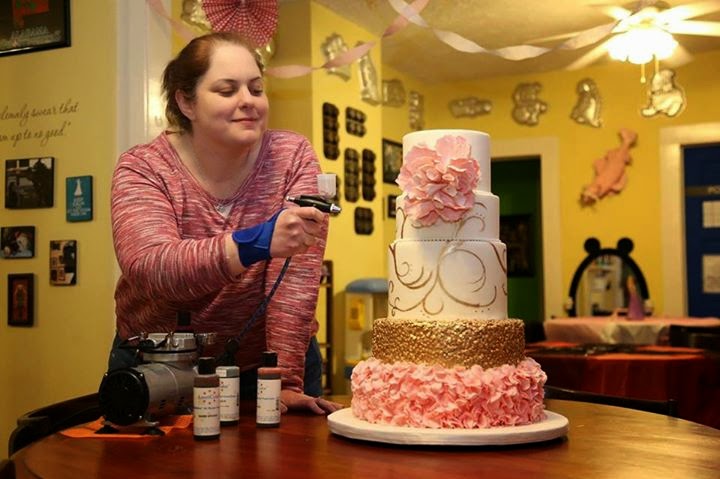 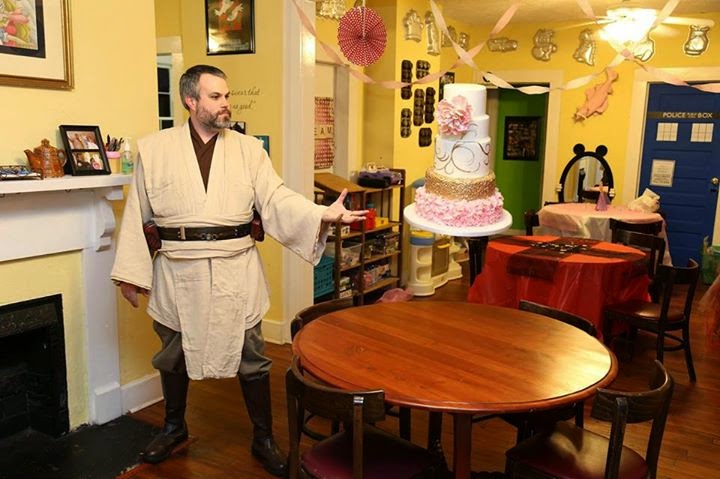 You know I just had to try and get a princess picture in there: 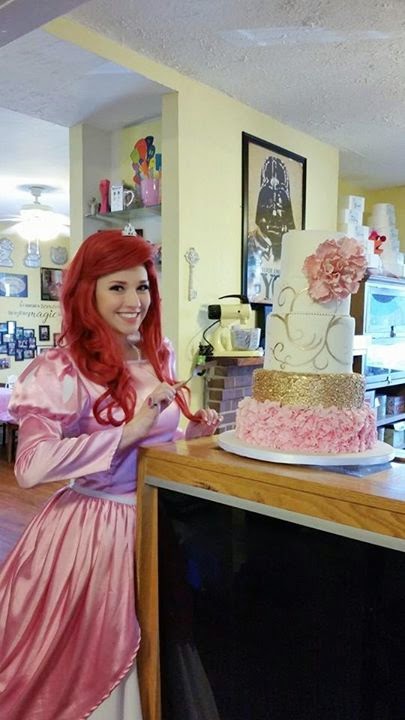 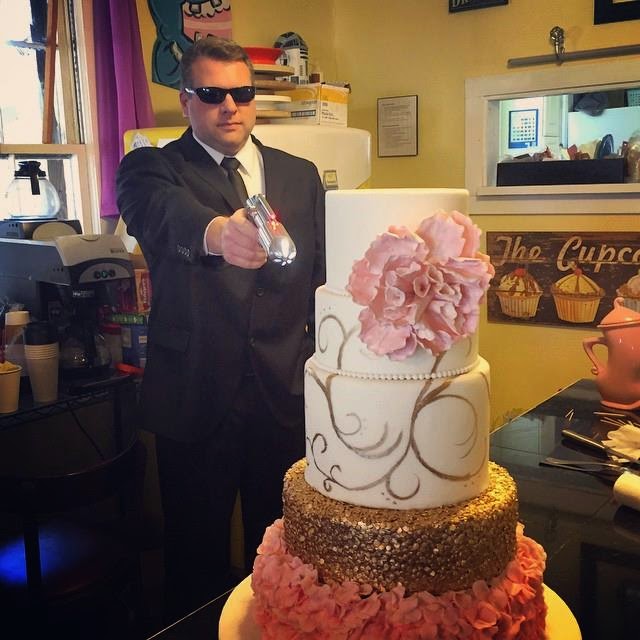 By the time I sent Christel the MiB picture, she had already decided to come down and rescue her cake sooner rather than later. And she did: 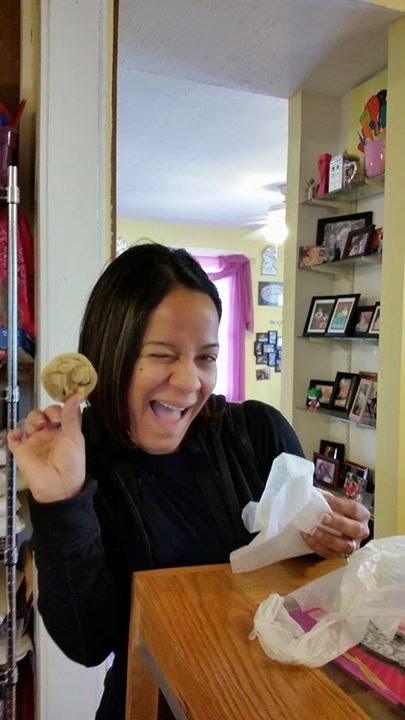 What Flavors Do You Have?

I love and hate this question at the same time. I love it because it sometimes gives me the opportunity to be creative with my clients.
For a cat wedding... How about tuna fish?
For a chocoholic's birthday... How about a dark chocolate cake with amaretto filling and a dark chocolate ganache?
For a guy's party... Have you heard about the bourbon maple bacon?

If you want a fruity rainbow cake with the flavors all goofy so that the purple layer tastes like cherry and the orange layer is apple- I can do that. But why on earth would I write that option on a flavor list? Not many people are going to want it (because it's weird) and those that do would rather keep that option on the super-secret. If we go advertising it, then everyone will want it!

But still... a list of flavors would be helpful for those people who don't come up with their own weird ideas and who just want to know what's available. Plus, most people don't spend every waking minute baking, decorating, reading, and thinking about cakes. (How strange.) And so it stands to reason that most people would like some guidance here.

Just promise me you'll keep in mind that this list is NOT EXHAUSTIVE and is subject to change seasonally and with what products come and go in the shops. I will try to remember to update this post as I learn more about baking and decorating. 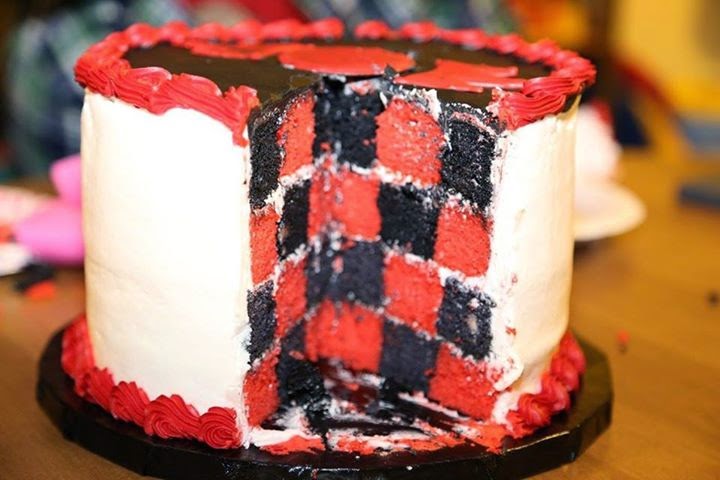 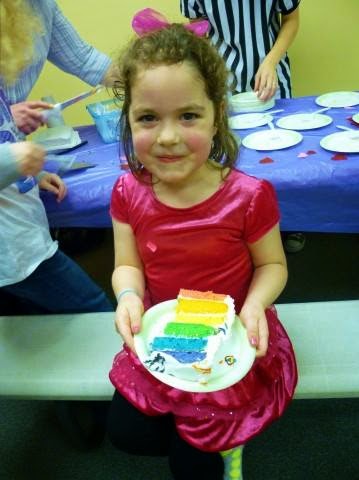 American Buttercream: This is the house standard icing, the one we use for decorating. It can also be flavored: amaretto, cream cheese, chocolate, almond, hazelnut, peanut butter, Nutella, lemon, cinnamon, rose... this list can go on forever. Just keep in mind that some flavors (i.e. peanut butter, Nutella) will change the color of the buttercream. I can't make white Nutella icing. I just can't. 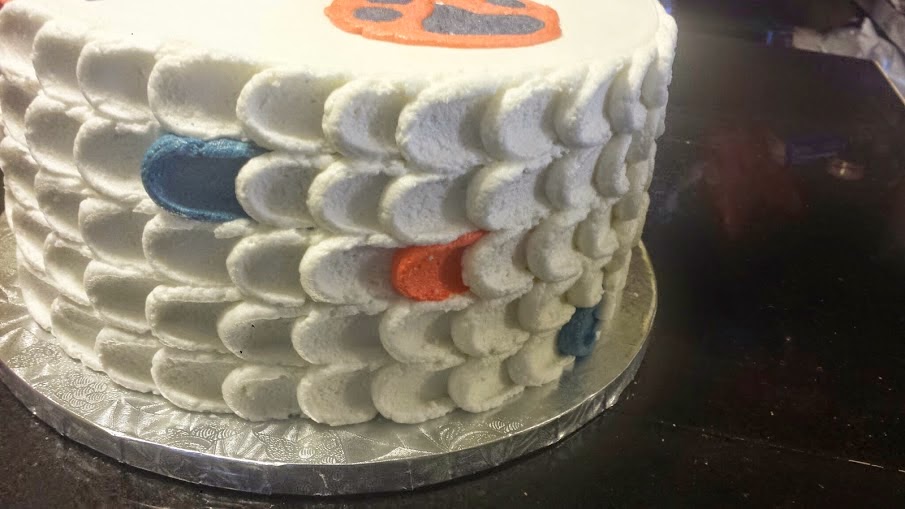 Swiss Meringue Buttercream: This is a smoother, silkier, less sweet icing. It is heat sensitive and does not belong outdoors in Alabama from April to October. It can also be flavored with things like chocolate, cream cheese, hazelnut, almond, etc.
Whipped Icing: a cream based icing with less sugar. It needs to be kept cool and doesn't travel well (because we use real cream)
Ganache: Ganache is pronounced "guh-nosh" is made of chocolate and cream. It can be poured or used like icing on a cake. Darn, it's good.
Royal Icing: That sweet icing that gets hard as it sets. We use it for the decorations on the top of sugar cookies (which make excellent party favors).
Fondant: Fondant is pronounced "fawn-dent" by almost everyone I've ever met in the cake world and "fahn-dawnt" by people who watch too much Cake Boss. Fondant is a sugar paste that can be rolled out to cover cakes in a smooth finish. It can also be cut or sculpted to make decorations for cakes. 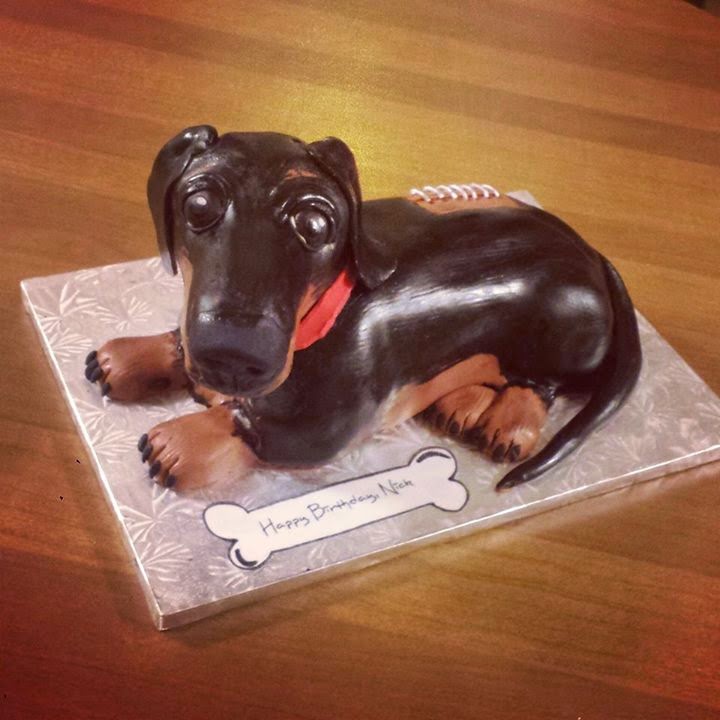 There is always buttercream or ganache on the cake under the fondant. Some people like to eat fondant, some prefer to leave it on their plate. Either is correct and just fine. Fondant can be made in just about any color. 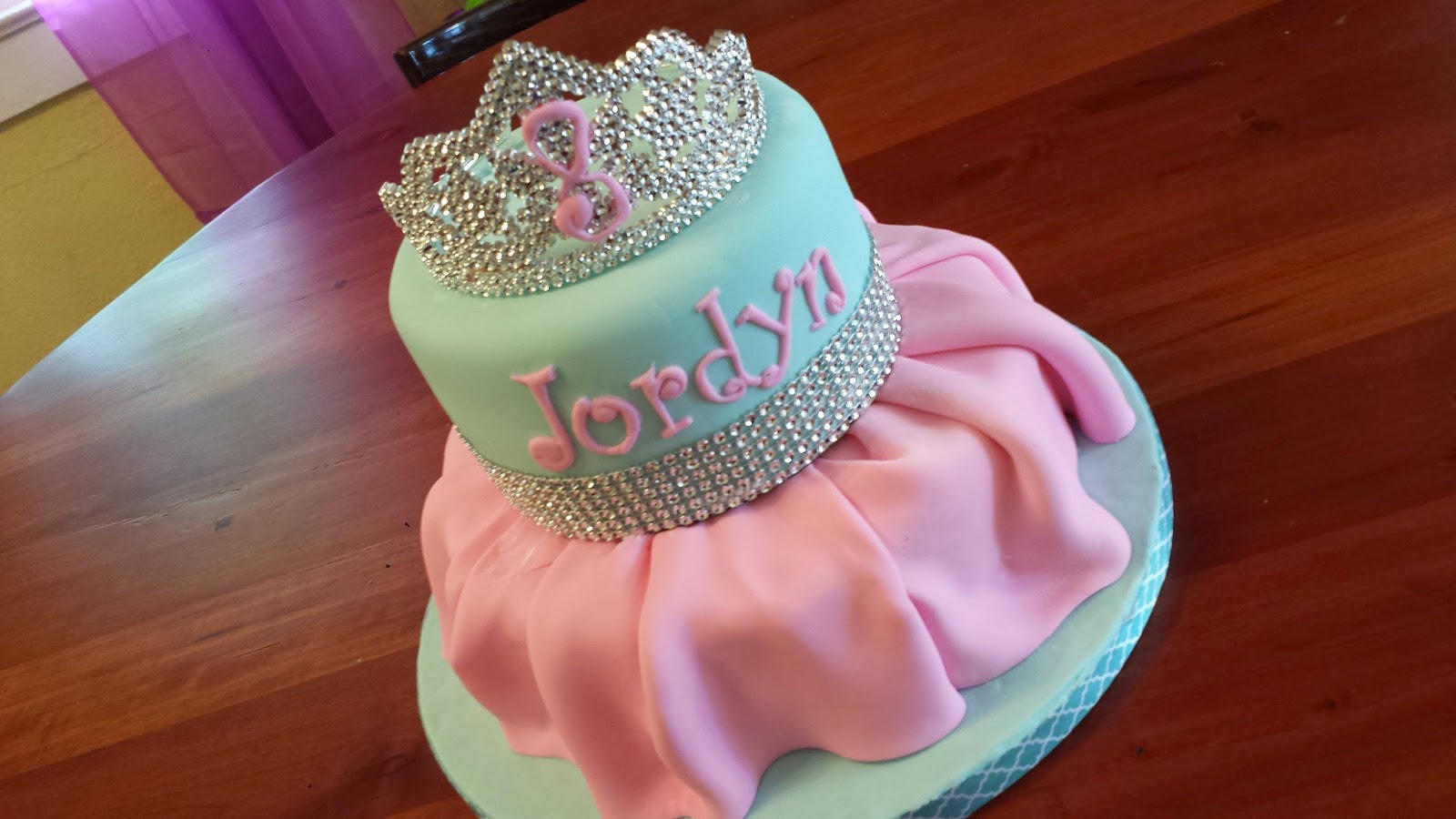 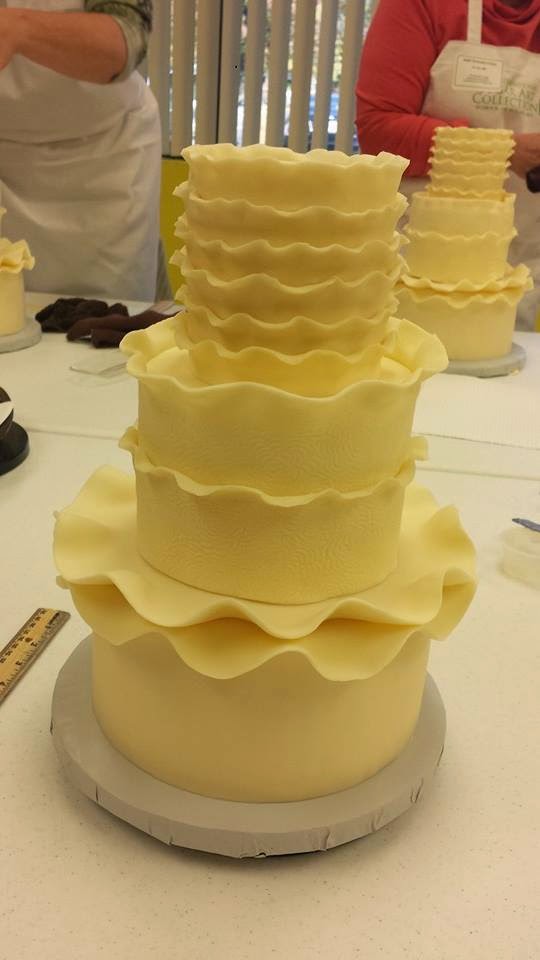 Fillings (the stuff between the cake layers):

Most cakes are stacked with icing between the cake layers. But, if you want something special, we can do that, too.
Fresh Fruit: strawberries, blueberries, raspberries, etc.
Jams, jellies, preserves
Anything you can use as a pie filling, we can also use as a cake filling. Let that sink in for a moment.
Fudge, Nutella, peanut butter
Almonds, pecans, walnuts, etc. 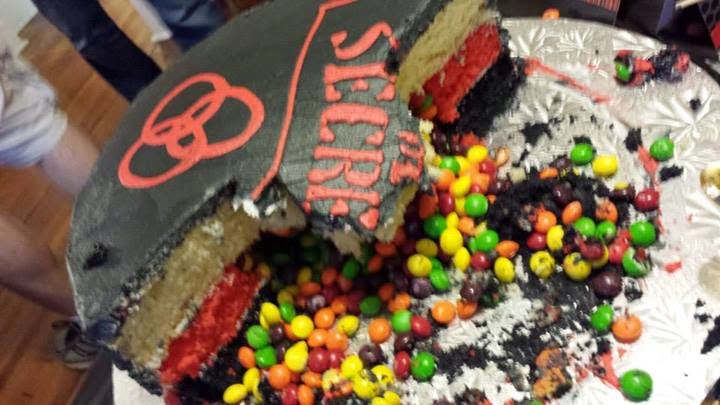 The Elvis: banana cupcake with fluffernutter icing and bacon bits sprinkled on top.
Orange Whimsicle: (formerly the orange dreamsicle)- remember those orange sherbet push up pops we had when we were kids? It's like those.
Lemon Bomb: lemon cake, lemon filling, lemon icing
Brockodile: bourbon bacon cake with maple icing, topped with bacon bits
The Wright: nothing. You get nothing. Order this flavor and you receive an empty box. Without the box.
Chad: lemon rosemary! (currently only available in pound cake form)
Ty: (TBD: something that thinks it's funny, though)
Seymour Cinnamon Chai: cinnamon butter cake with chai buttercream
The J-Fet: spicy dark chocolate cupcake with Mexican vanilla icing
Xina's Honea Pecan: honey butter pecan cake with cream cheese icing (This is Pocahontas' favorite!)
Lynae: caramel espresso cake with rich chocolate icing
The Stones (TBD)
Voldemort (or the cake that must not be named): dark chocolate espresso cake, fudge filling,  spicydark chocolate ganache... it's dark. Just... dark.
Jessamynt: Devil's food cupcakes with mint Oreo buttercream
The Butterfield Assorted: This one is surprisingly good- all the leftover batters from the week dumped into one pan. It's a grab bag and you never know what you're going to get! This one is especially good in cupcake form.

Want a flavor named after you? Email cakeapotamus@gmail.com for more info.

OK, do you see all of this? All these flavors and fillings that are all subject to the current price of butter and chocolate and what fruit is in season? THIS is part of why I don't have a price list. And this is why I have a hard time answering when someone calls to find out the price of "just a cake".

I've never met a just-a-person, so why would you get someone just-a-cake? People are special. They should have special cakes. 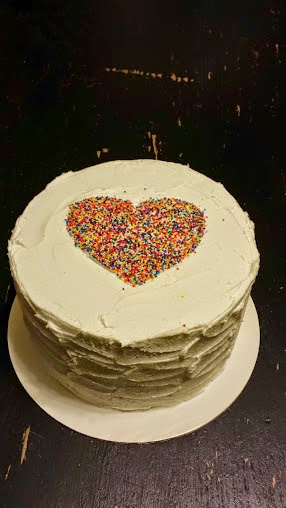 Want a custom flavor based on your child's favorite cereal or your favorite coffee creamer? I can do that. Call, email, or PM me on Facebook!