Why Darth Vader Riding a Unicorn?

Today was the girlpotamus's birthday. She's five and completely awesome. I am so lucky I get to be her mom (as she clomps into the room wearing my heels and clutching the stuffed dog her teacher gave her today).

Throughout the last year, I made a few cakes. I could tell when I had done something especially right when the girl asked if that cake was for her. She wanted this cake and that cake... her theme for her birthday cake changed a few dozen times.

When the time came to actually nail down the design, she came out of nowhere. "I want a cake that's tall like Rapunzel's tower."
O...K? Sure. I can do that.

We were looking online for ideas of how to make a tower cake when I asked her why she didn't want a Darth Vader cake. She recently started liking Darth Vader because he's shiny, he lights up, and her parents like him. She said Darth Vader cakes are not for girls.

Um... no. Have we learned nothing from Star Wars Katie?

So I showed her that Darth Vader riding a My Little Pony cake from Cake Wrecks:

And the conversation ended. Something connected in her head and she wanted a Darth Vader riding a My Little Pony cake, just like Sarah's except rainbow inside.

Last night, I made her cake. I baked the colors and stacked then with the 2 colors per layer: 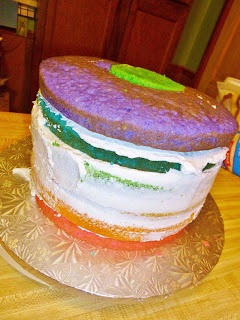 I did the pretty texture on the sides: 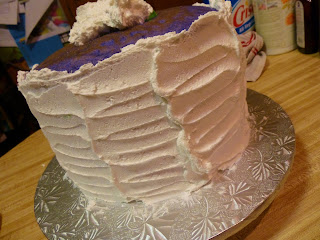 
So there's the story of the Darth Vader on a unicorn cake. It didn't take as long as last year's princess cake:

but that's ok. In light of a recent health scare, I'm making an effort to spend less time on cakes and more time on the people they're for. That's why my cake calendar gets fuller more quickly. Sorry. The bakery will be open before you know it!