OK, in the interest of full disclosure, I wasn't at THE cake camp. I was at A camp doing cake stuff. But that's the closest I'm gonna get for a while. So here we go:
This weekend, I had a marvelous cake adventure. It started Thursday night with a late, late cake night. I made some Dora cupcakes (sorry, no picture!) and a Hello Kitty cake. It was Hello Kitty that kept me up until 1am. But it turned out pretty well: 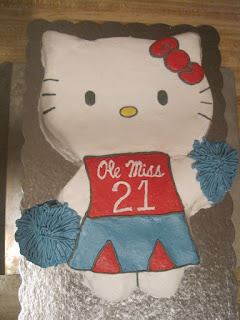 Hello Kitty came to school on Friday from which she headed out on her own epic adventure. Destination: certain annihilation... ummm... Mississippi. Done and done.
After work, it was home for a quick shower, kiss for the kids, and loading the Dora cupcakes in the car. I was on the road by 4:30! A little tired, but adventure beckoned.
I hit the road, headed to the town of Hiram, Georgia. I think I only got lost once on the way there, so that's a win. I delivered the cupcakes to their rightful owner whom I was meeting for the first time. Love her!
(Side note: I've made cakes for several people who found me through Facebook and they have all been delightful. Every time, I get nervous that they won't like their cake or me or something, and every time, it's a delightful encounter.)
From Hiram, I headed up and left toward Tennessee. I got lost once on the way to 75, but from there, it was smooth sailing. But late. And dark. Just me and the Glee soundtracks for six hours in the car. Oh, and coffee. I almost pulled into a hotel to rest a few times, but, in the end, I stuck it out and made it all the way... to the Group Lodge at Cedars of Lebanon State Park.
Have you ever seen that Friday the 13th movie where they're in the woods, at camp, and the psycho killer is stalking them as they walk about, completely oblivious to their impending demise? Yeah, it was like that. No lights, no people, just woods and psycho killers. But I made it in the end.
The Tennessee ICES folks had the lodge for Thursday through Sunday. (ICES is a cake group, in case you're unfamiliar.) It was wicked awesome. There was a HUGE room that was part ginormous kitchen and part meeting room. There were two dorm rooms with a bunch of bunkbeds. Remember the showers and bathrooms at Girl Scout camp? Yeah, like that. Good times. I got there late on Friday night, so I had missed the classes on Thursday and Friday ('cause I couldn't afford them- $400- what?!?!). But this is what they did on those days: 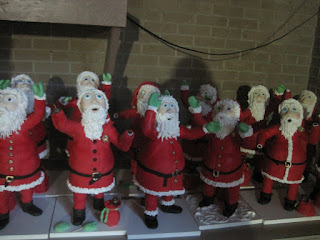 Ho-Ho's! Aren't they cool! They're cake! And they're all different. This one's my favorite: 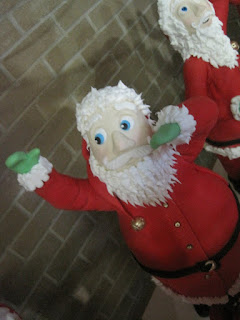 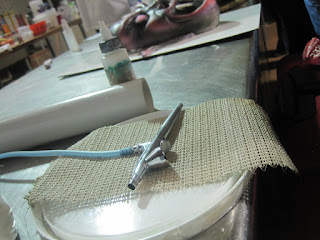 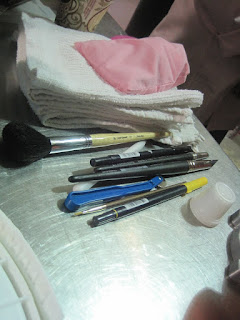 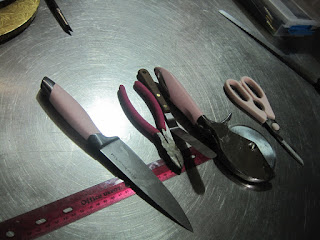 Who, you're wondering, did I get to see on Saturday? 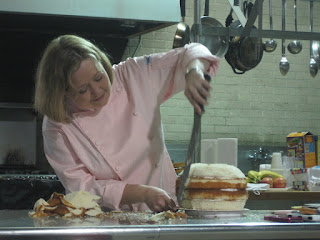 It's Bronwen!
Who doesn't love Bronwen Weber? That's right. Nobody. On a scale from one to awesome, she rocks my face off. AND, she did demos on Halloween cakes! 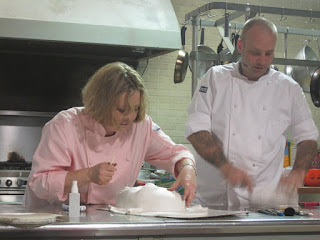 I took a ton of pictures. 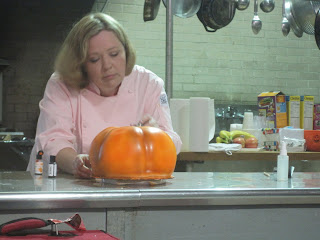 She has mad skill (so does her husband!). And so much fun to watch. 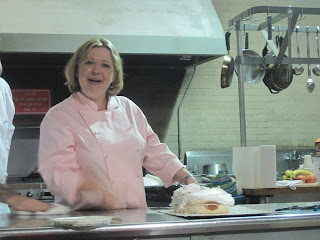 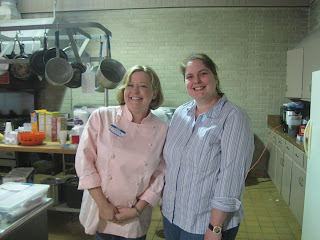 Oh, and she made some cakes: 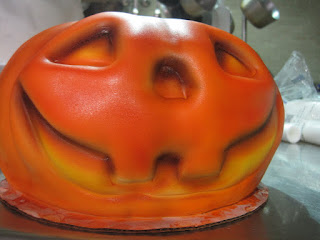 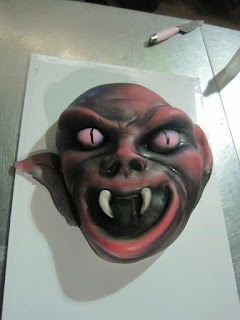 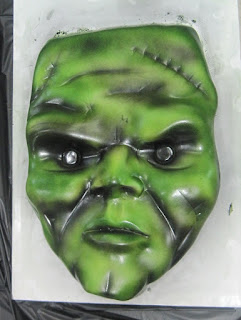 I am in awe of her skill. Good cake, good times, good stories.
But it didn't end there! After the Bronwen stuff, I hit the local McDonalds to scam some free wi-fi and take test 3 for my online business test. I found a Halloween store and explored for a while. Then, I met up with the ICES peeps for dinner at a local restaurant. I swear, the food at ICES was incredible. The food served at the classes was amazing. And check out this weird chicken salad from Demo's restaurant: 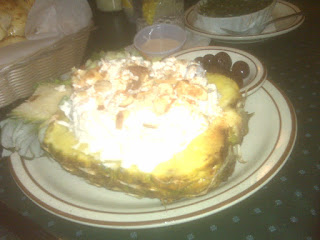 Yeah, it's served on 1/2 a pineapple. Weird.
Speaking of weird, there was this: 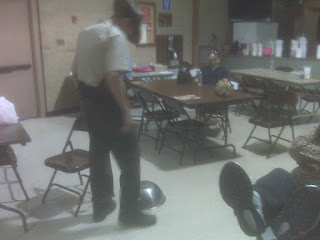 This is the park ranger they called in to handle the snake that was waiting for us in the meeting room when we got back on Saturday night. It was a cute little itty bitty snake.
Then, it was time for Sunday. Tennessee ICES has cool demos at their Days of Sharing. Check it out: 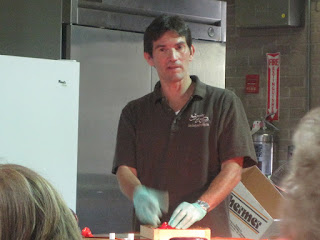 See this guy? He and his wife did amazing things with sugar. Just plain old sugar. And they made this: 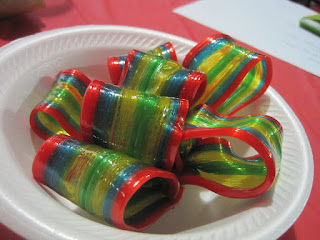 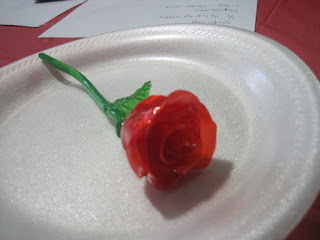 That stem is hollow! Insane.
Oh, and I got to make these: 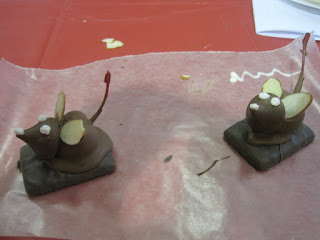 Huh. That's anticlimactic, isn't it? Ummm... I made these Christmas cookies too: 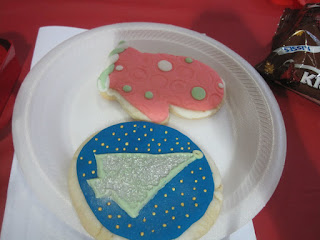 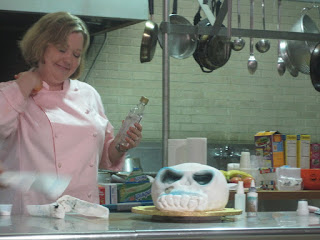 Yeah, that's vodka. I learned more about vodka that day than in all 4 years of college together. The things they don't show you on t.v. cake shows.
And speaking of t.v. cake shows, ya know this guy? 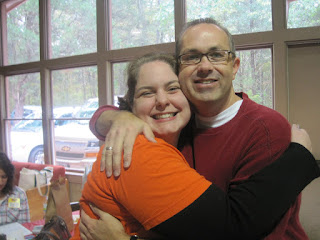 No?
You will.
*cough*December*6th*on*TLC*cough*
Posted by mandi at 3:15 PM No comments: