The bakery hosted its first party today. Appropriately, the first bakery birthday party was for one of my kids. My son turned seven today, and since tea parties aren't really his thing, I put together a spy party for him.

Why spies? Well... this kid is really into science. And super powers. And solving mysteries. A spy party seemed the best option for his party theme. Here's what we did:

We sent the invitations to Boo's friends, asking them to join us on a secret spy mission. When the friends arrived, they received their spy gear: 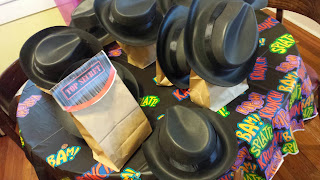 The fedora, of course, and each new agent got a Top Secret bag containing a magnifying glass, a spy notebook, a pen, a fake mustache, a compass, and some Smartees. I'd like to thank the Halloween season at Dollar Tree for making these goody bags possible.

We also had little badge/ID cards for every agent. I forgot to get an ink pad for them to put their fingerprints on their cards... so we used food coloring. Hey, you go with what you've got!

We decorated the shop with balloons, streamers, an Operation Birthday Blast banner, and some vintage electronics I scrounged from a local thrift shop. Note the ancient VHS camera: 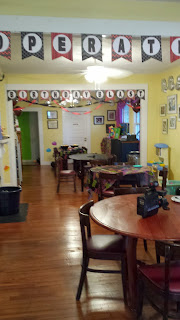 And food! Some good nosh: 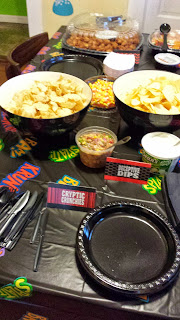 And drinks. Because what mom doesn't serve Capri Suns out of an artillery box? 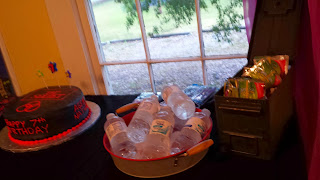 There was, of course, a black and red cake as requested by the birthday boy: 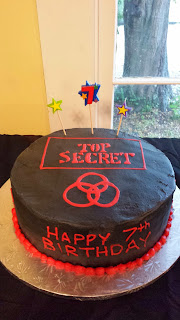 So the new agents ate for a bit. 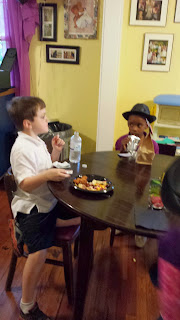 Then it was time to start the mission. With our first grade decoding skills, I made sure to keep the clues short and simple. 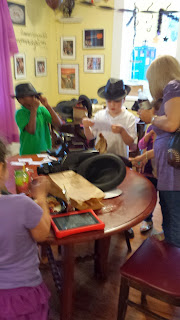 The agents took their first clue and set off for the rectangular table to find the next. I expected it to take them about half a second to find the second clue. However, when you're in first grade, your scavenger hunt experience is somewhat limited. So it took a while... and that was good! 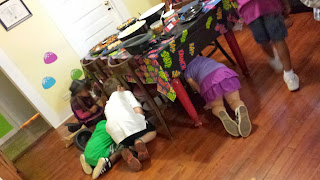 And so it went, one clue told them the next place to go and then the next and so on... 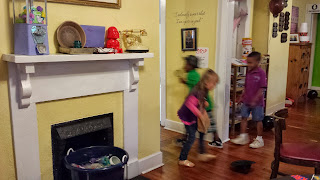 The clue searches were thorough: 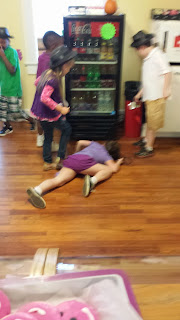 And there was teamwork! 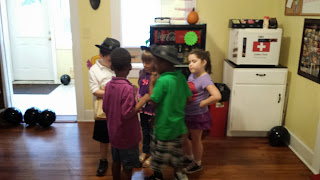 One clue told them it was time for cake... 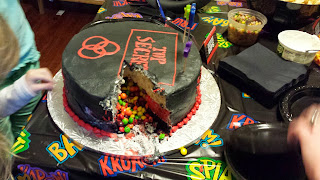 I don't think anyone was expecting the next clue to be inside the cake, buried in a few pounds of Skittles. But they seemed to enjoy that part! 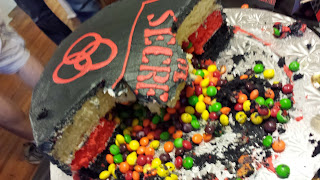 Did I mention some of the vintage decorations actually work? Hooray for learning about this magical, monitor-less computer that the old people call a typewriter: 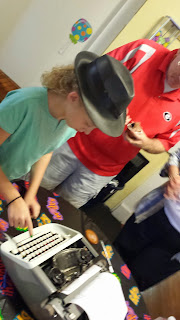 One clue said it was time to open presents! The last present had another clue inside. 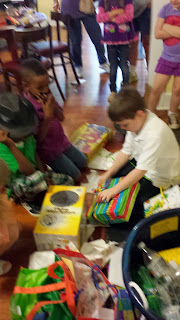 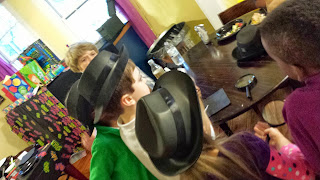 One clue told them to pull the pinata strings: 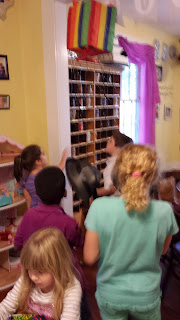 A clue fell out! 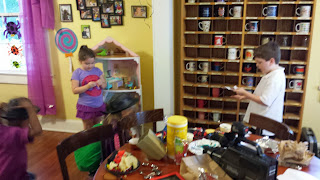 And, you know, candy: 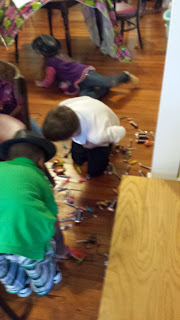 Almost there! The big, rusty trunk on the patio holds the birthday boy's surprise: 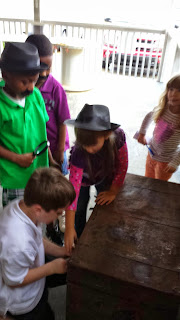 What kind of terrible, horrible, no-good mother ties up a kid's present with rope and a combination lock? 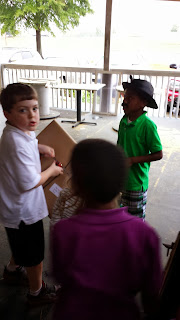 But no worries! The combination is hidden inside one of the party balloons. Oh, that popping was LOUD: 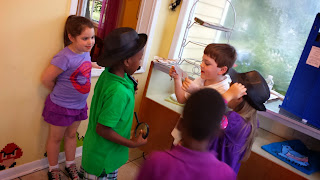 At last! Opening up the lock: 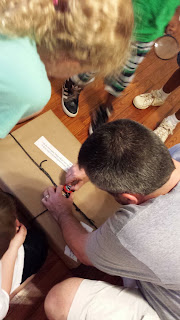 And there it is. The super spy kit that Boo had been talking about for months. 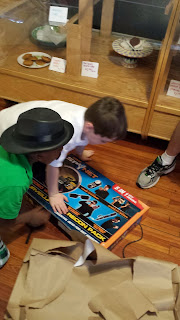 I think the bakery's first party was a success. Everyone seemed to have a good time, especially the birthday boy. So much fun! But I have GOT to remember to take that Spy Headquarters sign out of the front window tomorrow!
Posted by mandi at 8:31 PM 1 comment: